We use cookies to improve your user experience. By continuing to browse our site you accept our Cookie Policy
FREE UK SHIPPING OVER £20
Categories
Clear All Filters
Availability
Filter by Price
Color
Length
Thickness
Ball Size 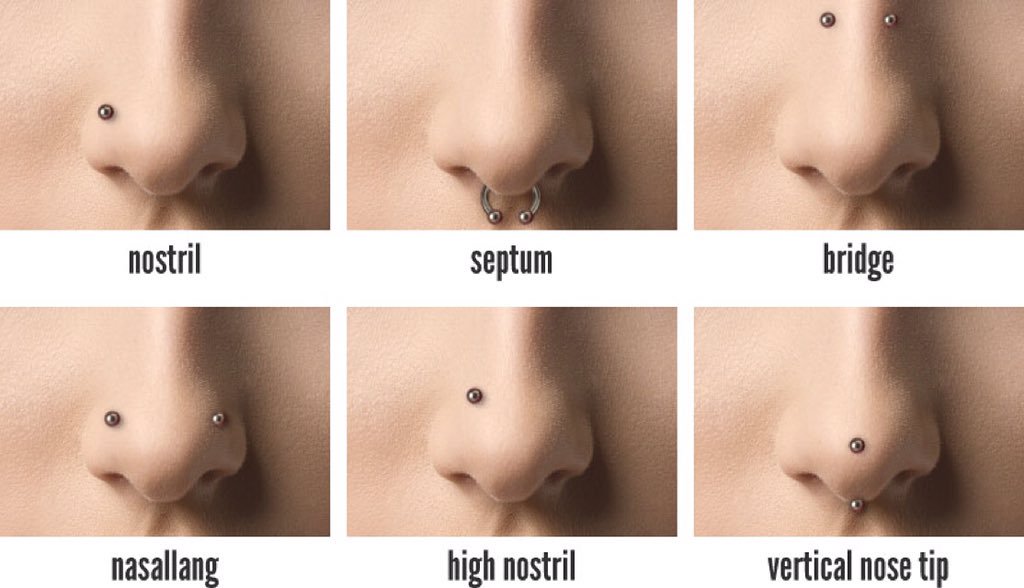 With the rising popularity of septum piercings, you may be wondering exactly how many different types of nose piercings there are out there. If you're in a research stage and contemplating whether to get your own nose  pierced, I commend you for daring to explore the multifaceted world of nose and facial piercings. In truth, piercing culture is vast, but there are some basic categories from which most popular nose piercings stem.

The history of nose piercing is rich and dates back centuries, to various civilizations. The size of jewelry worn in nostril piercings came with connotations of familial wealth for tribes both in Africa and the Middle East, and nose rings were allegedly gifted to new brides by their husbands as a form of security. Similarly, South and Central American civilizations utilized septum piercings and their adornments as status symbols.It was also popular for the women of the Apatanis tribe in India to gauge their nostrils to ward off the affections of men from neighboring tribes, as they were long considered the most beautiful women of the Aranuchal tribes.

In modern day Western society, many nose piercings have seemingly become associated with punk, alternative, and Bohemian culture. With their varying roots and intriguing aesthetics, not only do nose piercings require dedication and a tolerance for pain, but their significance can run deeper than what meets the eye. So to explore this arena a little bit further,I researched what's out there in the range of nose piercings and touched based with a talented local piercer and tattoo artist to check the facts. Here are seven current types of nose piercings, and some of the basic jewelry types that can be worn with them.

Arguably the most traditional and common nose piercing is the nostril piercing. Generally situated just above the crease where your nostril curves gently away from your cheek (although position does vary by person, depending on nerve structure, nose structure, and aesthetic appeal),nostril piercings consist of a single hole and can be done on either side of the nose. However, in Ayurvedic medicine it is said that the position of the nostril piercing can coincide with female reproductive organs, allegedly easing birthing as well as menstrual cycles (this auspicious position is primarily believed to be the left nostril).

Nostril piercings are arguably the simplest nose piercing and have the widest range of jewelry potential. Due to their easily accessible location, they allow the insertion of studs, nostril screws, L-shaped pins,nose rings, circular barbells (commonly known as horseshoes), and captive ball rings. The gauge of your jewelry will vary depending on your end goal, but most nostril piercings begin at an 18 or 20 gauge.

A variation on the nostril piercing, the high nostril is pretty much what it sounds like. It's a bit more unique, and can be a good way to combine or layer nose piercings for a more striking effect. Due to the location of the piercing, the jewelry selection for this hole becomes some what limited. High nostril piercings are best suited to studs, nostril screws, and L-shaped pins, or variations on those types of jewelry, and are not well suited to rings and hoops. They are tricky to reach, and for that reason can be difficult to pierce, so you'll want a piercer who has specific experience with this type of nose piercing.

Septum piercings are kind of the superstars of the nose piercing family right now. Especially in the world of fashion, considering they could be seen all over during Fall 2015 New York Fashion Week's unofficial septum debut. They're versatile, can be flipped easily out of view (with the use of a horseshoe), and can even be gauged.

However, septum piercings are not always easy to achieve.Although they're fairly common and most piercers will have plenty of experience with them, they take some maneuvering to get to and a solid knowledge of where septal cartilage begins and ends.

Adorn your septum piercing with circular barbells, captive bead rings, and if you're dedicated, gauges.

Bridge piercings are pretty cool. Technically classified as a surface piercing, they do not puncture cartilage or bone. That being said,since they are a surface piercing, they are more susceptible to migration,which is a process in which your body pushes a piercing closer to the skin's surface — essentially healing it away. If this occurs, you'll want your piercer to remove the jewelry and allow the hole to close.

Looking for the rhino? Here it is: The vertical tip piercing. This unique and fairly rare nose piercing runs vertically, as the name would suggest, from just above the tip of the nose to just under the tip of the nose. Due to the structure of your nose, a curved barbell is really the only acceptable jewelry for this type of piercing.

A combination between a gauged septum and half of a vertical tip, the septril appears to be a rather delicate piercing externally.Internally, though, the process takes years of dedication to achieve. The gauging of a septum is a time-intensive practice, and can be pretty painful,depending on the position and structure of your unique septal cartilage.

As far as jewelry goes, most people sporting a septril will choose a small, curved barbell or flat back stud for the septril hole, and an eyelet, plug or tunnel for the stretched septum.

The nasallang is clearly pretty intense, although outwardly,it may not appear to be. In fact, to most bystanders the nasallang looks pretty much the same as two evenly placed nostril piercings. The nasallang, however,is actually a tri-nasal piercing, penetrating low on both nostrils as well as the septum. In most cases, this piercing is done all at once with one needle and is meant to be worn with a straight barbell, similar to an industrial cartilage piercing in the ear.

Feeling inspired? Clearly the realm of nose piercing is an exciting one. Now, just imagine all of the combinations possible when you start layering, doubling, or tripling the piercings above. It's no wonder nose piercings are slowly seeping into mainstream Western culture.

Add to Cart
Add to Wish List
Compare this Product

Spike On Both Sides Barbell

Add to Cart
Add to Wish List
Compare this Product